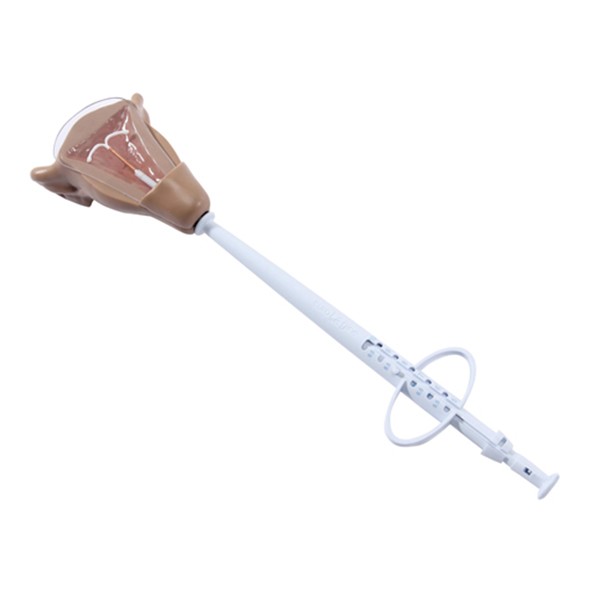 With the GOLD T® it was achieved to take advantage and maintain the progress made until then regarding contraceptive copper loading (375 mm2) and the geometric shape of the armor-base IUD as peculiar "T" or 'Y'.

In 1909, the German physician Richter recommended intrauterine insertion of two or three strands of silk thread to prevent conception.
In 1930, another German, Gräferberg, described the ring that bears his name, built in silver.
It was from 1960 when widespread commercialization of intrauterine devices made of polyethylene and no metal added began, also called inert IUDs.
At the beginning of the decade of the 70's, from the work of Jaime Zipper in Chile, it appears the second generation of devices, called " medicated IUDs," where the plastic becomes vehicle of other substances such as metals, hormones and anti-bleeding. Zipper, working with various metals, showed that with the placement of a copper wire in the fallopian tubes of a rabbit, egg implantation is prevented; it went from there to human experimentation, winding a wire with 200 mg of copper to the plastic T designed by Howard Tatum in USA, and the clinical studies showed a low incidence of complications and great effectiveness. This advance was able to increase the effectiveness and decrease the rate of bleeding and expulsion, frequent complications with inert IUDs.
In 1999, Eurogine, in collaboration with the Polytechnic University of Catalonia, the Centre for Development of Industrial Technology (CDTI) and the ATYCA initiative of the Ministry of Industry and Energy, developed the first intrauterine device with a filament of copper and gold core with an insertion system more accurate and thus avoiding uterine perforation.
Parallel to it and in the same development, a study of corrosion in intrauterine copper wire as well as copper wire with silver core, called second generation IUDs, was conducted.
As a result of this R & D agreement established between Eurogine and the Department of Materials at the Polytechnic University of Catalonia, it was developed the Gold T®, a new generation device with the objective that it'd exceed in reliability to the ones then existing and whose insertion would be less traumatic for women.
With the GOLD T® it was achieved to take advantage and maintain the progress made until then regarding contraceptive copper loading (375 mm2) and the geometric shape of the armor-base IUD as peculiar "T" or 'Y'.
On the other hand, with added improvements in the development of three sizes of armor-base (Maxi, Mini and Normal), and the gold core in the copper wire and an absolutely new insertion system worldwide, GOLD T® managed to improve: